The Body of Nilla Vanilla Wafers 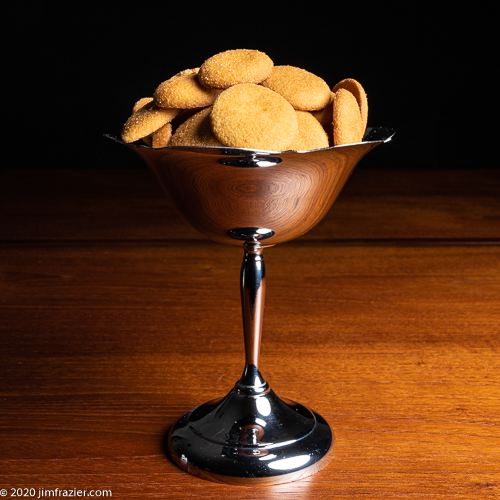 One of the few things that I have left from my folks is my Mom's silver candy dish (I called it a chalice).  And I'm not sure it's silver - plated, or just stainless steel.  Anyway, it has pride of place in my lair.

One of the reasons that I keep it is for this particular childhood memory.  Enjoy the sharing.

I grew up Catholic.  And like any good Catholic mom, mine probably dreamed of me being a priest.  She made me a vestment out of an old bath towel (basically a terrycloth poncho) and let me use this chalice as a...well...chalice.  So in went the Nilla Vanilla wafers and I said "Mass".  It was easier back then since the Mass was in Latin and I just mumbled a few unintelligible words, lifted up the chalice and that was that.

However, I'll always regret drafting the kids who lived next door into receiving "communion." For they were, after all, Baptists.  I think they humored me for the Nilla Vanilla wafers.

Which makes me think that the Pope should just change to Nilla Wafers.  And milk instead of wine.  I'll shoot him an email in the morning.

These pictures are copyrighted. You may NOT use these images for ANY purpose without my written consent.

Welcome to Jim Frazier Photography. You'll find some of my better photographs, as well as photography links, tips and techniques.
Flickr is the best place to find my pictures, other than on this blog. Flickr is also where you'll find all of my images categorized by subject and my portfolios.
Here is additional information if you'd like to read my fascinating bio, or to license a picture or purchase a print or hire me.
I also teach photography.
I also have listed some useful photography links here.

Almost all of the pictures from here will wind up on Instagram and Facebook as well. I won't friend you on Facebook unless I know you, but you can always follow me. My images are public.
My web page is jimfrazier.com.