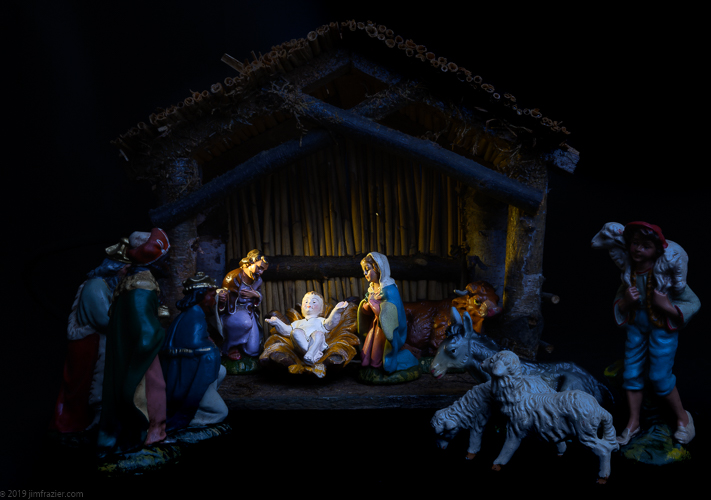 I grew up with this Nativity set, so it's at least 65 years old.  It got a lot of use when I was a kid.  There were some wax choir boys, angels and reindeer that were part of the scene too, but they have been lost to time.

This year, for some reason, I asked Kate if we still had it and she dug it out and put it up.  Then I developed an idea for a picture.  This comes satisfyingly close to what I had pre-visualized.

Technical: In order to get the effect of a lantern illuminating JMJ, I used an LED flashlight with a flexible neck and a yellow gel.  The Three Wise Men are concealing the head and the whole flashlight is black so I didn't have to Photoshop anything out.  Then, two SB600's, with blue gels, were used in a shoot-through umbrella (camera right) for the overall scene. Triggered by CLS.  Finally, I focus-stacked three images in Photoshop.  And thank the Lord for gaffers tape.

Thanks to Kate for hauling this out.
Posted by Jim Frazier at 4:46 PM

These pictures are copyrighted. You may NOT use these images for ANY purpose without my written consent.

Welcome to Jim Frazier Photography. You'll find some of my better photographs, as well as photography links, tips and techniques.
Flickr is the best place to find my pictures, other than on this blog. Flickr is also where you'll find all of my images categorized by subject and my portfolios.
Here is additional information if you'd like to license a picture or purchase a print or hire me

Almost all of the pictures from here will wind up on Instagram and Facebook as well. I won't friend you on Facebook unless I know you, but you can always follow me. My images are public.
My web page is jimfrazier.com.